According to family stories, Anna Love’s ancestors came from County Tyrone in Ulster, Northern Ireland. In addition, my father remembered that Ann 'Nancy' Graham Killen (Anna's maternal grandmother), lived in Londonderry adjacent to Tyrone prior to emigrating to America.

Confirming such family memory is more difficult in Ireland than other parts of the British Isles. The difficulty is due to the destruction of Irish records prior to the 20th century, including virtually all census records. Census returns 1821–51 were almost entirely lost in 1922 in the destruction of the Public Record Office in Dublin during fighting in the Irish Civil War. Census returns 1861–91 were completely destroyed by government order, many during the First World War as scrap paper.

Whatever the reasons, the result is significant difficulty in tracing family roots in Ireland prior to the surviving 1901 Census. The 19th Century being our time of interest - Anna's Irish relatives having left for America prior to 1900 - we are faced with a most difficult task.

Nevertheless, some records in churches and other sources did survive to the present era. Over time more of these are coming to light and finding their way onto the internet where they have been indexed and made available to researchers. Primary sources for northern Ireland are PRONI and the all Ireland Irish Family History Foundation. 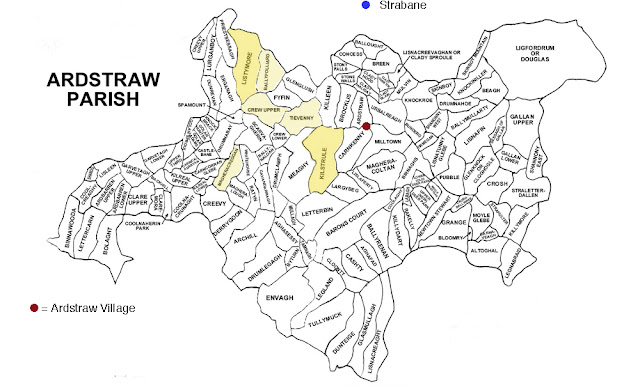 Surviving marriage and lease records show the 'Loves' inhabited and farmed land in the Parish of Ardstraw on the northwestern boundary of County Tyrone (See maps) since the 17th Century. The earliest surviving records of Anna's ancestors in Ireland are of leaseholds held by members of the Love family from the Earl of Abercorn. Virtually all the Irish lands granted to the Earl of Abercorn were in County Tyrone.


There are a number of lease records involving the Love family, so the family chart is presented to clarify the persons involved. The earliest extant record relating to a direct ancestor is the leasehold (Map #1) from James Hamilton, 8th Earl of Abercorn to William Love (ca1728>1806) in Listymore in 1771 for 186 acres. This is a huge area for those times but it turns out most of this was on a mountain and therefore not arable. So he only paid annual rent of £16.17.8. In 1777 he was still renting the same land.

The next leasehold (Map #2) is for more than 100 acres of land leased in 1860 to the Love brothers of William, James and Thomas. Interestingly, there is a 'Graham Town' shown across the road from the leaseholds in the latter map.

All these leases are in the Listymore Townland. Note the location of Listymore on the Ardstraw Parish map above. (These Love leases were brought to my attention by Linton Love.)


Griffith’s Valuation from 1853 to 1865 provides detailed information about land tenure, names of lessors and occupiers, their land and buildings. It is the only island wide census/survey of Ireland that survives from the 19th Century. An excellent free source regarding these records is the Ask About Ireland website. The valuation in County Tyrone was completed in July 1860.

The brothers William, James and Thomas are listed in the survey, as well as William's son Samuel. Properties listed include the brothers' leaseholds in Listymore discussed previously. Thomas also has listed property in Magheracreggan. James has property in Ballyfolliard and Tievenny townships. Samuel has property in Ballyfolliard (26 acres) and Crew Upper (45 acres) townships. All of these other townlands of Ardstraw either adjoin or are close by to Listymore, as shown in the 'Ardstraw Parish' map above.

The closest Presbyterian Church to the townlands where our Loves first settled in the 1700s would have been at Ardstraw Village, four to five miles away. This was the oldest Presbyterian Church in the neighbourhood. In this church on January 10, 1844, Samuel Love (1821~1900) married Mary McClintock per the surviving marriage record to the right. Mary's father was Thomas McClintock. There is no record of him leasing land in County Tyrone during the Griffith survey 16 years later.

Land records show the Killen family was farming in Ardstraw Parish in the 19th Century. According to the Griffith Valuation published in 1858, Robert Killen was leasing land in Kilstrule Townland from the Marquis of Abercorn.

Robert and Ann 'Nancy' Killen had six children, all but one being girls. I could find no birth record for the girls, but lucked out with the boy John. So far as I know, he was the youngest child and the Ardstraw Church baptism record shows him born on July 27, 1859. His parents are listed as Robert Killen and Nancy Graham and their address as Kilstroll (an alternative spelling of Kilstrule) in Ardstraw Parish, County Tyrone.


Robert Killen died October 17, 1862 when his children were still minors ranging from 3 to 14 years of age. Eliza Jane Killen (Anna's mother) was the oldest. The estate (under £450) was granted in 1872 (10 years after his death, and we thought our courts were slow) to Anne Killen in Londonderry. (In Ireland Nancy can be used as a nickname for Anne/Ann or Agnes, or as its own name.).

We know Nancy/Anne never remarried. A widow mother with six minor children was unlikely to operate a 21 acre farm. We know she retained the Kilstrule land many years after Robert's death. The book, Irish Landowners in 1876 shows a Mrs. Robert Killen holding 21 acres in Kilstrule Townland, Ardstrawbridge, Newtownstewart worth £14 & 10 shillings.


My guess is she sublet the land to another farmer, giving her a steady income, and took employment as a dressmaker or other work available to women at that time. Based on family stories, she may have moved to Londonderry to live. We know she left Ireland in 1874, so she probably ended her lease on the land before she left and the 1876 book failed to record the change in tenancy.

In the Ardstraw Presbyterian Church, on January 20, 1842, Sarah Love, daughter of William Love (1785 - 1860) married an Isaac Graham. This is one of the few definite records of Anna's Graham ancestors that has survived.

Based on this marriage record we know Isaac's father was named James. The Griffith Valuation for County Tyrone in 1860 shows a James Graham leasing property in Town Parks of Strabane, Camus Parish. Camus Parish adjoined Listymore Townland in the parish of Ardstraw. (See Ardstraw Parish map above and County Tyrone Parishes map below.)

Blog Archive - Clicking on image will usually enlarge it.